How should I interpret Ranking Probability scores? What's a good score? How accurate are they? Print 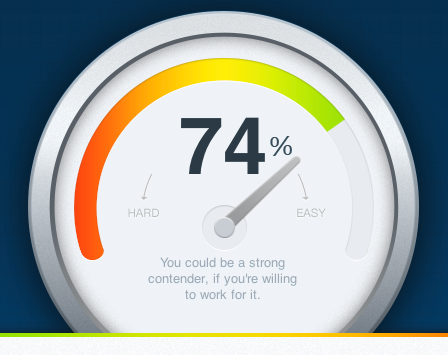 Ranking Probability scores are our attempt to the measure the likelihood that a given page on your website could gain a page one ranking in major search engines if they targeted that particular keyword. These predictions make the assumption that you follow on-page optimization best practices to effectively target the keyword (don't worry, we can help with that), and that the page you entered as a representative page is similar in importance to the page you'll use to target the keyword (if using "A Page Like").

Here is a rough guide to what the scores mean:

How accurate are Ranking Probability scores?

Keep in mind that like the weather forecast or any other prediction, Ranking Probability scores have their limitations. Our goal is to enable you to make smarter decisions by knowing when you're on the field and when you're not even in the same league, but we can't win the game for you. Apply common sense, and if a Ranking Probability score doesn't look right, take a look at the Competitive Analysis table to see if that may provide a fuller picture. Search engines, particularly Google, have incredibly complex ranking algorithms including the ability to incorporate data that no one outside of their company has access to (for example, data from Chrome, Analytics, AdSense, Android, Gmail, and other Google products). Sometimes unusual results are due to one of these factors. Importantly, CanIRank doesn't attempt to account for search engine penalties, so if your site frequently scores in the 90s but fails to rank despite outscoring the competition in all of the 6 Ranking Factors, it's possible that you may be suffering from a penalty (contact us for help if that's the case!).

Experienced webmasters learn to accept Google's unexplained ups and downs as part of the process. For example, Google patented a system intended to confuse webmasters working to improve their rankings by responding with random ranking changes rather than the ranking improvement that might be expected. We remind ourselves that "Google works in mysterious ways", and it's not our part to try to understand it, but simply to keep working on making our sites the best they can be so that we can earn Google's good graces in the long run.

Did you find it helpful? Yes No

Send feedback
Sorry we couldn't be helpful. Help us improve this article with your feedback.